“The Dolphin of Europa” comes of age

Within a month, this NOVELLA goes to AMAZON as an EBOOK with new cover art by Stephen Youll. (Tiny cropping from the cover below. What creature? In what ocean? Whose hand? Stay tuned for the full cover to come.) 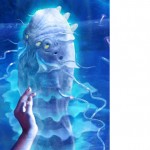 Previously in Aphelion Webzine: “The Dolphin of Europa” tells of an innocent nurse in 2152, trapped in an underground cavern on this icy moon, with a half crazed marine biologist and a creature (mugshot on left) whose mesmerizing song feels too good to be true.

YOUR HOMEWORK: check out the recent article about Europa in my Solar System Science section. There’s some scientific basis for at least some of this premise.

What is Speculative Fiction?
ThrillerFest and Lee Child’s Lessons: Even for Sci Fi

One Response to “The Dolphin of Europa” comes of age