Hold Off on the Alpha Centauri Trip

Cosmic hearts started beating a little faster last fall when a team of European astronomers announced that they had found a planet with a mass comparable to Earth’s orbiting Alpha Centauri B, part of a triple star that is the Sun’s nearest neighbor, only 4.4 light years from here. 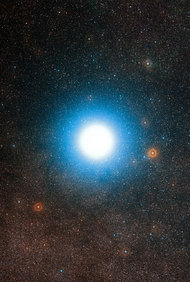 A wide-field view of the sky around Alpha Centauri, 4.4 light-years from Earth, the star system closest to our own.

As Geoffrey W. Marcy, an astronomer at the University of California, Berkeley, said at the time, “This is close enough you can almost spit there.” Close enough, some astronomers said, to send a scientific probe that would get there in our lifetime. The new planet, only four million miles from its home star, would be too hellishly hot for life, but, astronomers said, where there is one planet there are likely to be others, more comfortably situated for life.

Now, however, in a shot across the bow of cosmological optimism, a new analysis of the European data has cast doubt on whether there is actually a “there” there at Alpha Centauri B.

The SETI project: are we alone?
A new twist on bidding to save Mankind